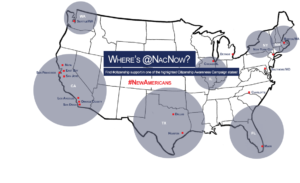 On November 20th, President Obama announced his Immigration Accountability Executive Action, which includes a Citizenship Awareness Campaign aimed at providing information about U.S. citizenship and the naturalization process in the 10 states where three-quarters of LPRs reside. Visit a NAC site in one of those states for information about citizenship!

On November 20th, President Obama addressed the Nation in a prime time announcement that detailed his Immigration Accountability Executive Action. Overall, the President’s actions are expected to help approximately 4.9 million people. These actions cover a range of immigration topics, including deferred action, impacts on businesses, workers, and entrepreneurs, border security, interior enforcement, and naturalization and integration.

How the Immigration Accountability Executive Action Impacts Naturalization and Integration

Through a Presidential Memorandum, the President will create a White House Task Force on New Americans that will be led by Cecilia Muñoz, Director of the White House Domestic Policy Council, and DHS Secretary Jeh Johnson. The Task Force will be asked to provide a strategy for addressing immigrant integration within 90 days.

USCIS will also expand options for paying naturalization fees to include credit cards by the end of 2015 and explore additional measures to expand accessibility. This includes studying a potential partial fee waiver for applicants whose income is more than 150% and no greater than 200% of the federal poverty level or a scaled adjustment to the fee based on a range of income levels.

Please contact the New Americans Campaign or one of its partners in your city for information about citizenship and naturalization services.