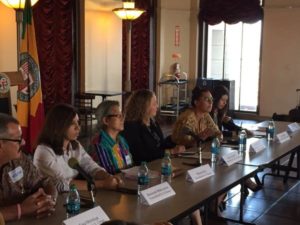 Over 50 people and 18 media attended the roundtable to discuss the role of ethnic media in amplifying the importance of citizenship and to hear personal stories from three newly naturalized citizens, including Manok Cha from Korea.

For Manok Cha, the decision to naturalize came down to her family. Cha, who was born in 1937 in the northern part of Korea and moved to Seoul with her parents as a child, said she became a citizen so she wouldn’t have to face what her parents did – being separated from their own families who remained in North Korea.

“My father and mother weren’t able to see their parents and siblings again,” Cha said. “At a young age, I learned the pain of family separation.”

Now Cha, who became a U.S. citizen in 2012, has petitioned for her own kids to join her in the United States.

For more on the roundtable and stories from other newly naturalized citizens, see coverage on New America Media.