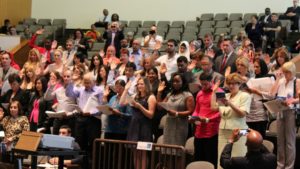 On May 4, U.S. Citizenship and Immigration Service (USCIS) published a Proposed Rule to adjust the immigration and naturalization fee schedule for the first time since 2010. We previously wrote about those proposed fee changes.  The public had until July 6 to submit comments on the new proposed fees.

The Naturalization Working Group, an informal coalition of organizations that is the policy compliment to the New Americans Campaign, submitted a letter commenting on the proposed fee changes.

The letter expresses concern about the increase in the naturalization fee. The fee increase will likely cause some naturalization-eligible immigrants — lower income and working class immigrants who cannot afford the fee but who are above the threshold for the fee waiver or discount fee — to delay or forego filing an application for citizenship.

At the same time, the Naturalization Working Group praised USCIS for proposing the discount fee for immigrants making just above the income cutoff for the fee waiver. For successful implementation of the new partial fee waiver, the group urges USCIS to adopt a streamlined form and application procedure, and to conduct outreach regarding the availability of the new partial waiver.

The letter also expressed concerns about the proposed 95 percent increase in the fee for the N-600 and N-600K, Application of Certificate of Citizenship. These forms, the letter notes, “are commonly used by the children of U.S. citizens to obtain certificates of citizenship because they were either born abroad, were adopted, or became U.S. citizens automatically after birth and before turning 18.” Currently, the fee is $600, and USCIS proposes to raise it to $1,170.

Another issue of concern highlighted in the letter was the proposed 65 percent increase — an increase to $555 — in the fee to replace a lost or stolen naturalization certificate.

Finally, the Naturalization Working Group highlighted an issue that has resulted in fees that are considerably higher than the cost of the work to process certain applications. Applicants for most immigration and some naturalization benefits must pay what is essentially a surcharge that is used to fund activities for which no fees are collected. For example, no fees are charged to refugees and asylees (they are humanitarian benefits), so the cost of the agency’s Refugee, Asylum, and International Operations must be picked up by other fee-paying immigrants.

Similarly, the cost of adjudicating applications for which fees are waived must be picked up by other fee-paying immigrants. Specifically, the “cost reallocation” (surcharge) for the Certificate of Naturalization (N-600) is $330. For the N-565 (to replace a naturalization certificate), it is $157. (USCIS did, however, keep the surcharge off the fee for the N-400 naturalization application, which otherwise would have gone to $871.)

The Naturalization Working Group urges USCIS to seek congressional appropriations to pay for the costs of operations for which no fees are charged, so that fee-paying immigrants are not burdened with these costs.

The letter from the Naturalization Working Group can be found here. Campaign partners have spoken out about the proposed fee increases in recent op-eds. They can be read here and here.