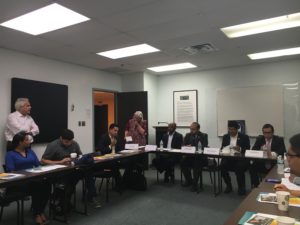 The discussion focused on NaturalizeNY, a new citizenship initiative launched in July by New York Governor Andrew Cuomo. Like the New Americans Campaign, NaturalizeNY aims to maximize the number of LPRs who apply for citizenship. Officials says that despite the recent spike in citizenship applications, there are still hundreds of thousands of eligible immigrants across the state of New York that have not naturalized.

“There are over 642,000 individuals in New York City alone who are eligible for naturalization,” said Roberto Frugone, Northeast Regional Director of NALEO Educational Fund and the site leader for the New Americans Campaign in New York.

The New Americans Campaign provides free and low-cost services, including citizenship workshops and English language and civics classes. The roundtable underscored the accessibility of these services and local Campaign partners spoke. Newly naturalized citizens also shared details about the ease and affordability of the citizenship process in large part to Campaign partner assistance.

“It’s a lot easier than most people think,” said Frugone about the naturalization process, and we’re here to help.”
Also discussed was the economic benefits of having more citizens for all states across the country, including New York.

Other participants at the roundtable included Jorge Montalvo, Deputy Secretary of State of New York for Economic Opportunity and New York Councilmember Carlos Menchaca, the first Mexican-American elected to public office in New York City. They discussed the economic benefits of citizenship for states and the civic engagement opportunities for new Americans.

For more information on the roundtable and the benefits of citizenship see coverage by New America Media.