On the eve of this year’s Citizenship Day, the New Americans Campaign and its national partner the National Immigration Forum released a new paper, “The Road to Naturalization: Addressing the Barriers to Citizenship.” 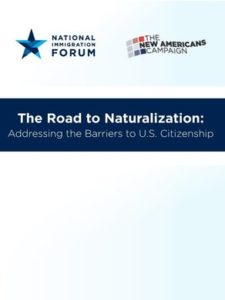 The paper examines the current landscape of citizenship-eligible lawful permanent residents (LPRs) and the barriers to naturalization, and it provides policy recommendations to make the process more accessible and affordable to all eligible immigrants.

The LPR population in the U.S. continues to grow while millions of citizenship-eligible immigrants do not take the critical next step to become citizens. Naturalizing more LPRs would provide significant economic benefits to the nation because it helps immigrants improve their social and economic status. Naturalized immigrants generally have higher incomes that green card holders. And, once LPRs naturalize, they have access to the rights and opportunities only available to U.S. citizens.

U.S. Citizenship and Immigration Services (USCIS) recently released updated data about the number of citizenship applications the agency received by the end of the third quarter of the government’s fiscal year 2016 (FY16).

This spike in citizenship applications is typical in an election year. A desire to vote is an important motivating factor for citizenship. So are certain imminent policy changes and proposals to increase the price of the naturalization application.

Why don’t more LPRs naturalize? There are a number of reasons. For some, there is evidence that the price of naturalization is a barrier. For many others, it’s a lack of information. A recent survey of immigrants eligible to naturalize found that more than half (61 percent) never received information about how to naturalize.

The lack of information is a challenge the New Americans Campaign addresses with innovative techniques for reaching those eligible to naturalization. And, although the application fee is set by the government, there is an information component about the price as well. Some immigrants who think citizenship is too expensive qualify for fee waivers, but they just don’t know it.

Lack of information and the high price of citizenship are two barriers deterring some immigrants from becoming citizens, but there are many others. “The Road to Naturalization” further addresses those barriers and provides recommendations to make citizenship more accessible and affordable to all eligible immigrants.

The New Americans Campaign and its leaders continue to address these barriers to citizenship and what our government can do to help.