Citizen After 60 Years: “It was all worth it” 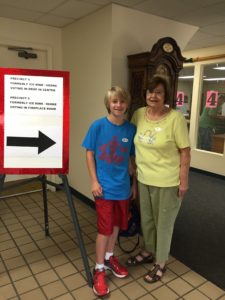 Gabriele and her grandson who helped her prepare for the citizenship exam. He accompanied her to the voting booth for the first time.

Gabriele Wallace was always interested in politics. Having grown up during World War II, she experienced first-hand the importance of getting along during difficult times.

As a child, Gabriele was forced to flee her country with her mother and three siblings when Russia invaded. They went to Prague and later sought refuge back in Germany, 50 miles south of Munich. She grew up in the north eastern part of Germany that was given to Poland after the war. Though she rarely talks about those harrowing years, living in poverty and uncertainty in the midst of the war was a devastating experience in her life. It shaped much of her life philosophy of keeping a positive attitude and constantly thinking “tomorrow is another day.”

When Gabriele Wallace met her Tennessee-born husband in Germany, where he was stationed at a U.S. Air Force base, a new opportunity presented itself. They got married in Germany, and right before Christmas of 1955, when she was almost 20 years old, Wallace came to the United States and settled in Trenton, Michigan. She still lives there, 60 years later.

Gabriele, who describes her life in Trenton as quiet and full, has three successful children and seven grandchildren. Besides enjoying life with them as a retired bank teller, now has a special reason to enjoy life: becoming a U.S. citizen this year, at age 80.

She says the easiest part of the naturalization process was working with the Michigan Immigrant Rights Center, a local New Americans Campaign partner in Detroit.

She also praises her 12 year-old grandson for his encouragement and for helping her prepare for the citizenship test. 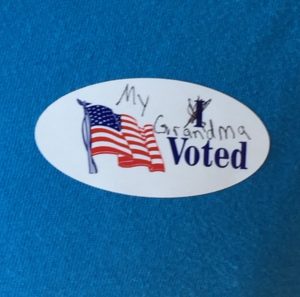 Gabriele’s grandson was very proud that she voted in the August primaries.

Gabriele’s interest in citizenship was rooted her in desire to vote. She believes it’s essential in the current political climate.

“The world is changing so much. Having lived through a war and experienced the devastation, I know how horrible it is, and how much people need to get along in difficult times,” says Gabriele. “I don’t judge anyone, but it’s tough to see the hardship the people of war-torn countries go through these days. I think it’s important to voice our political opinion today more than any other time, which was my motivation to become naturalized.”

This new U.S. citizen describes her English language ability as the most difficult part of the naturalization process from her experience.

“I was always worried about taking the naturalization test. English is my second language and I don’t have any formal education in English,” Gabriele said. “I was worried that I would not pass the test and that would be embarrassing.”

That’s where the New Americans Campaign and the resources provided by Michigan Immigrant Rights Center helped.

“Once I became aware of the topics that were going to be on the test, then I knew that I would be able to do well,” she said. “The testing booklet provided clear information and made studying for the test easier. It had been a long, long time since I needed to take a test on any subject, [but] I realized that it was not necessary for me to worry so much about the test.”

Gabriele also learned that because of her age and the length of time she had lived in the U.S. she was allowed to take a shorter version of the naturalization exam.

Gabriele voted in the August primaries, with her grandson nearby, continuing to give her his encouragement. She looks forward to voting again in the General Election this November.

She also encourages other green card holders to apply for citizenship.

“For those that are elderly like me, there are kind people like those at the Michigan Immigrant Rights Center that are willing to help you get through the process,” Gabriele says. “It was all worth it.”