Citizenship: “There is no better way to call a country home”

Oscar Acevedo came to the United States from the Dominican Republic when he was thirteen. His mother, sponsored by her mother, was granted a green card and moved to the U. S. in quest of better opportunities for her sons and herself.

“My mom encouraged me to apply for citizenship,” says Oscar. “I knew if I would become a citizen I would be able to stay in the U.S. and travel with no problem. I also look forward to sponsoring my father to bring him to the U.S. once I turn 21.”

Oscar attended Juan Morel Campos Secondary School in Brooklyn, New York, where he played on the baseball team. His love for the game is rooted in his home country, he says. But Oscar is now proud to call America his home.

His time at Juan Morel Campos was integral in his journey to citizenship. It was here where he met Mariela Regalado, the director of college counseling for the College Bound Initiative, which helps high school students pursue college education and obtain scholarships. The program places counselors in New York City public schools to serve as full-time college counselors.

Mariela worked closely with Oscar and helped encourage and guide him through his journey to naturalization. As a naturalized citizen herself, she knew the important benefits citizenship would offer him. 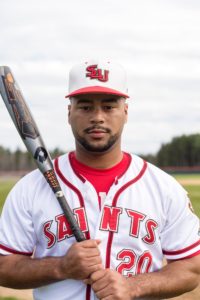 Mariela connected Oscar with Catholic Migration Services, a local New Americans Campaign partner in New York, so he could seek help and financial support for naturalization.

“As a counselor, one of my goals is to offer my students different resources that would bring them closer to achieving their American dream,” she says. “That’s why I connected Oscar with Catholic Migration Services when he mentioned he would like to become a U.S. citizen.”

Oscar is headed back to St. Lawrence University in Canton, New York, where he’ll be a sophomore this year. He will continue his studies in economics and statistics. He’s also on the university’s baseball team and hopes to write for the newspaper.

Oscar’s father still lives in the Dominican Republic. Through a visitor’s visa he was able to attend Oscar’s high school graduation last year. His mother and high school counselor, Mariela, were there, too. 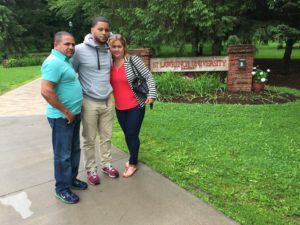 Oscar with his parents, who dropped him off at college

Nearly a year after graduating from high school, Oscar was sworn-in as a new U.S. citizen in June this year. The following month, Mariela drove Oscar and his parents to upstate New York, where they dropped him off for his second year at St. Lawrence University.

More opportunities await him there.

“I didn’t speak any English when I arrived in the U.S. at age 13,” says Oscar. I worked hard and I’m proud to say I am a citizen now. I feel like I have more say as a citizen. I plan to vote in this election. I think there is no better way to call a country home than to become a citizen of that country. Citizenship is worth it, everyone should give themselves the chance of becoming naturalized.”