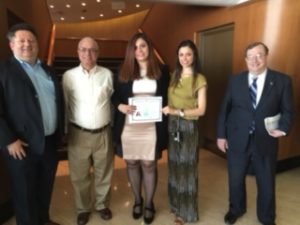 Last spring, 80 immigrants became United States citizens in Detroit at an oath ceremony hosted by the Detroit New Americans Campaign and the City of Detroit.

Among those newly naturalized citizens was the Al Alwachi family, four individuals who came to the U.S. from war-torn Baghdad, Iraq.

Alalwachi Foud Abdulhussein was the first in his family to pursue citizenship. With the assistance of the Detroit New Americans Campaign and the International Institute of Metropolitan Detroit (IIMD), the local lead organization, Foud Abdulhussein successfully completed the naturalization process and enrolled in IIMD’s 10-week citizenship course. The course, run in conjunction with U.S. Citizenship and Immigration Services, prepared Foud for his citizenship test.

The Al Alawachi family came to the U.S. to pursue greater safety, security and opportunities, like attending college. However, they felt that their freedoms were limited as lawful permanent residents. By becoming U.S. citizens, they could gain full access to the value and benefits that citizenship offers.

“I chose the United States rather than any other place in the world because I believe in this country’s values,” said Farah, 33, who is currently studying civil engineering at Wayne State University. “We all come here for freedom.”

On May 20, the Al Alawachi family became U.S. citizens at the City Municipal Complex in Detroit. After the ceremony, they posed for a photograph together to commemorate their achievement. In the picture above, Farah (center) holds her Citizenship Certificate and poses next to her father, Foud Abdulhussein (left) and her younger sister, Amel (right), along with the Wojciech Zolnowski (far left), Executive Director of the International Institute of Metropolitan Detroit and Robert Sullivan (far right) the Director of Career Development at the International Institute of Metropolitan Detroit.