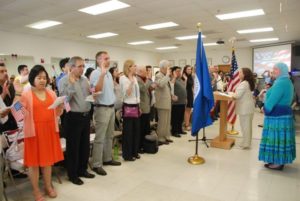 Last year, 34 lawful permanent residents from 13 different countries became U.S. citizens at a special oath ceremony with the Korean community in Chicago. It had been 30 years since a ceremony like this was hosted.

Among those newly minted Americans was 85-year-old SaHoon Kim, who came to the U.S. from Korea 40 years ago. SaHoon attended citizenship classes and received help with his citizenship application from New Americans Campaign partner Hanul Family Alliance. 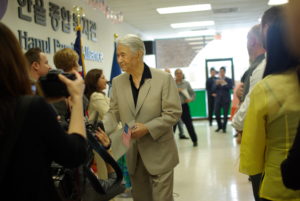 “Before I die, I want to be a U.S. citizen,” SaHoon said in this news coverage of the oath ceremony. “You can say I’m old, but I’m very excited to be here at this ceremony.”

Jaesook Kim also became a U.S. citizen that day.  Her dream was to hold the American flag as she sang the National Anthem at her oath ceremony. She was able to do just that thanks to the support of her citizenship classmates at Hanul Family Assistance.

On Saturday, Aug. 20, Hanul Family Assistance and the Illinois Coalition for Immigrant and Refugee Rights (ICIRR) will host a free citizenship workshop for Korean-American communities in Chicagoland. They expect 30 aspiring new Americans to attend.