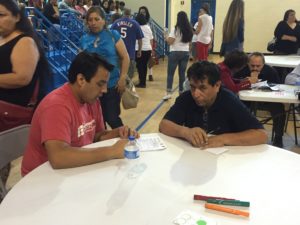 Among other things, this citizenship campaign will connect citizenship applicants with service providers who can help them complete their naturalization applications.

One of the barriers to citizenship is the perceived high application cost. While some eligible lawful permanent residents (LPRs) are deterred by the price tag, others are daunted by the English language and civics tests. Due to these misconceptions, naturalization rates have declined in the United States.

Because of these decreasing naturalization rates, campaign partners are hoping to revitalize and re-educate the public about the benefits of citizenship, including increased income and stronger protections under the law.

Phone banks opened to provide information on how to become a citizen and for LPRs to make appointments at citizenship workshops and classes taking place throughout LA County. These services are available in Spanish and Asian-Pacific Islander languages.

This campaign is unique because of the role these Spanish-language media outlets play as partners. In a time when the rights of immigrants are being tested, this local campaign brings much needed information and services to citizenship-eligible lawful permanent residents.