Celebrating Citizenship for Members of the Armed Forces 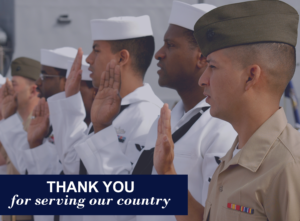 Today and this week, to mark Veterans Day, U.S. Citizenship and Immigration Services (USCIS) is recognizing service members, military spouses, and veterans taking the Oath of Allegiance to complete their citizenship process.

USCIS will welcome more than 10,000 new citizens at roughly 130 ceremonies that began Saturday and continue through Friday. More than 255 of those being naturalized are veterans, service members and military spouses. These naturalization ceremonies highlight USCIS’s commitment to bringing immigration services to members of the military and their families.

Immigrants’ involvement in the military is longstanding. In the 1840s, foreign-born soldiers comprised roughly half of the military. As of 2008, at least 5 percent of active-duty personnel were foreign-born and about 65,000 immigrants were serving in the armed forces, two-thirds of whom were naturalized citizens.

Choosing to serve in our nation’s military has added benefits for lawful permanent residents who are interested in citizenship. USCIS can accelerate the application for citizenship for members of the United States armed forces and recently discharged members.

Congress established that process in the 1940s, after the United States entered World War II. Expedited citizenship is available not only to members of the armed forces but also to their spouses, even sometimes spouses who are abroad.

One final military opportunity for citizenship applies to immigrants with very particular skills such as expertise in certain medical specialties or special language and cultural backgrounds. The Military Accessions Vital to the National Interest (MAVNI) program is available not only to permanent residents, but also to potential recruits who are refugees or asylees or who have Temporary Protected Status.

Citizenship also offers opportunities for those who wish to serve our country through military service. Earlier this year, Cathleen Farrell from the National Immigration Forum, one of the Campaign’s national partners, was interviewed with her daughter for Story Corps. Cathleen’s daughter, Manuela, recently became a citizen and now attends the U.S. Naval Academy in Annapolis, MD, which prepares young men and women to become professional officers in the U.S. Navy and Marine Corps. Manuela will get her college education at the Naval Academy and will be an active duty service member. An opportunity like this is only available to U.S. citizens. Click here to listen to their story.