These seven organizations, as well as collaborators from the City of Atlanta, Coalition for the People’s Agenda and the League of Women Voters of Georgia, join the growing list of over 100 New Americans Campaign partners across the country that promote naturalization for the nearly 9 million citizenship-eligible lawful permanent residents in the United States.

“Joining the New Americans Campaign is an exciting opportunity for local nonprofits and community stakeholders to work together to encourage the diverse lawful permanent resident communities of Atlanta to naturalize,” says Jessica Daman, managing director of immigration services at the Latin American Association (LAA). “As U.S. citizens, these individuals may vote and engage more fully in the issues that affect their communities, our city and the state of Georgia. The LAA is thrilled to be the site leader and to convene our partner organizations. We recognize that while Atlanta’s immigrant communities are diverse, when they unite to engage in their communities, they can work together for the common good of all Atlantans.”

Here’s what our New Americans Campaign partners in Atlanta are saying:

Jennifer Bensman, Senior Program Director, Immigration Legal Services, Catholic Charities of Atlanta
“Catholic Charities of Atlanta’s Immigration Legal Services staff is committed to providing quality immigration legal help to low-income individuals throughout the state of Georgia. We are proud to be a part of the New Americans Campaign in Atlanta because we are dedicated to serving those in need who would otherwise not be able to access or afford legal services. It is important for Legal Permanent Residents to apply for and become naturalized U.S. citizens. Citizenship through naturalization affords these individuals all the rights of U.S. citizenship, including the right to vote and unrestricted travel.”

Stephanie Cho, Executive Director, Asian Americans Advancing Justice – Atlanta “As an immigrant rights organization that offers in-language legal assistance to the low-income AAPI community, we are particularly excited about partnering with NAC. Georgia has one of the fastest growing immigrant populations in the country and NAC brings important resources and successful and strategic plans to help these immigrant communities naturalize, which leads them to a pathway to greater civic engagement.”

Learn more about our impact and success since 2011: 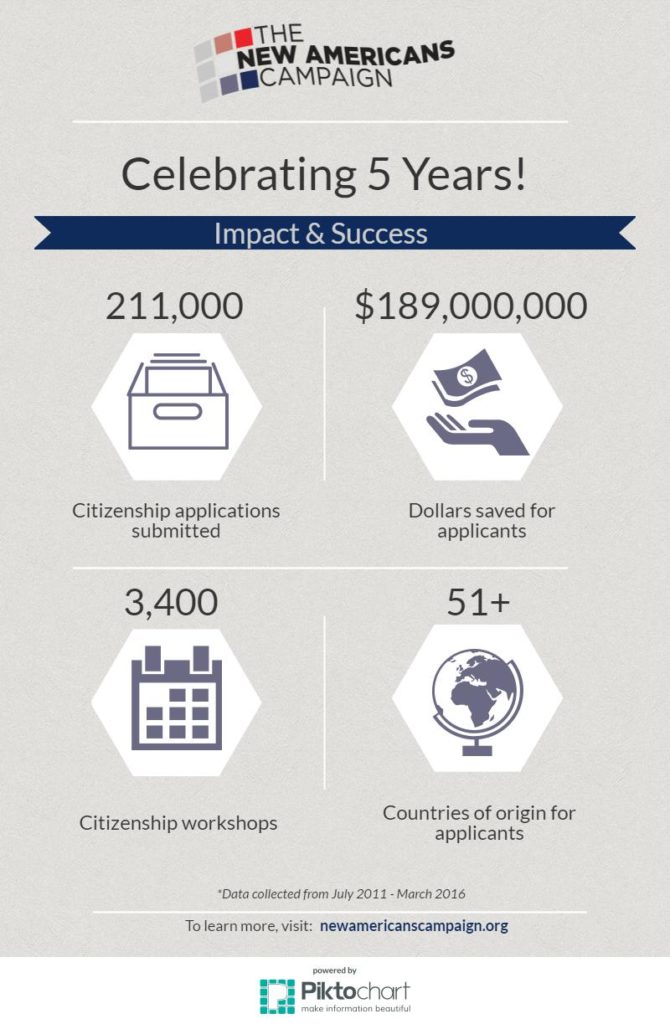