Citizenship: A Gateway to New Opportunities 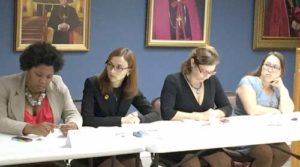 On April 7, the New Americans Campaign and New America Media hosted an ethnic media roundtable in Miami to discuss the barriers that prevent immigrants from becoming citizens, what ethnic media can do to address those hurdles, and how the naturalization of new Florida citizens would change our communities.

For one attendee, Sarai Portillo, citizenship means being able to travel freely, without fear of harassment.

Sarai had not intended to become a citizen. She believed that her green card alone would shield her from possible deportation, and that with it she could freely visit her family back in Mexico. Sarai and her husband planned to return to Mexico eventually.

But Sarai had received a speeding ticket one time in Portland. This mark on her otherwise spotless record caused her to be screened routinely at airports.

“I didn’t know that [with a green card] you could still be refused [re-entry into the United States]. It was frustrating and scary,” Sarai commented during the roundtable.

After consulting an immigration lawyer, Sarai decided to apply for citizenship. She became citizen in 2013. Citizenship has allowed Sarai to travel freely without fear of being denied re-entry after visiting her family.

“I felt very much relieved,” she said. “Now I can truly say that I can stay in this country as long as I want to.”

There are 8.8 million lawful permanent residents living in the U.S. who are eligible for citizenship. On average less than 10 percent apply each year. Reasons for this reluctance include the mistaken belief that having a green card alone will protect them from deportation or denial of re-entry.

Some immigrants fear they will not be able to afford the $680 application fee or that they will not pass the citizenship test in English. This was a concern for Fabiola Valencia, a Peruvian immigrant who worked part-time and supported her family through food stamps.

Fabiola, much like many other immigrants, was unaware of the federal government’s fee waiver program when she submitted an inquiry about becoming a citizen. Because of her financial situation, Fabiola qualified for assistance under the program. She became a citizen two weeks before the roundtable. Citizenship has afforded Fabiola new opportunities to support her family.

Krystina Francois of New Americans Campaign partner Catholic Legal Services, Archdiocese of Miami says that programs that promote citizenship not only help newly naturalized citizens earn a higher income but also are economically beneficial to the community at large.

For more on Sarai’s story and the roundtable, see coverage on New America Media.