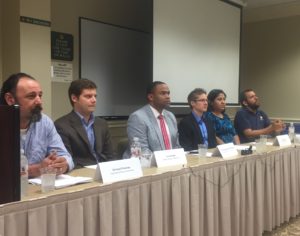 On Aug. 18, the New Americans Campaign and New America Media hosted an ethnic media roundtable in Dallas to discuss the barriers that prevent immigrants from becoming citizens, what ethnic media can do to address those hurdles, the role of the citizenship campaign and the opportunities and benefits available to new U.S. citizens.

Representatives from local partners Catholic Charities of Dallas, Proyecto Inmigrante and the International Rescue Committee spoke at the roundtable and welcomed U.S. Rep. Marc Veasey (D-Texas) as he addressed more than 30 attendees and representatives from nine media outlets.

Rep. Veasey called for more lawful permanent residents in Texas to take the step to become American citizens. Not only will they will have the right to vote, petition for their family members and get government protections when they travel abroad, but they also will be eligible to apply for high-paying federal jobs, which are now booming in Texas.

“There are more than 100,000 defense jobs that offer six-figure salaries in Texas,” Veasey said. “We need newly naturalized citizens to fill these jobs.” 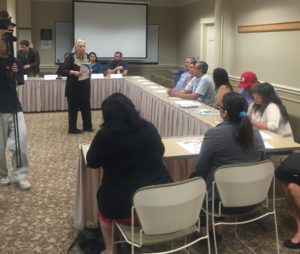 Sandy Close, Executive Director of New America Media, speaks with journalists at the start of the Dallas roundtable

In recent years, Dallas/Fort Worth — dubbed the Silicon Prairie — has been listed among the top 10 U.S. cities for defense jobs and IT positions for security-cleared professionals. Many of these jobs require skilled professionals who speak languages other than English.

And because they are federal jobs, only U.S. citizens can apply.

Veasey says the only way for lawful permanent residents “to have a profound impact on policy” is to naturalize and elect leaders who represent their communities.

This local roundtable comes as Dallas readies itself to be the host of the New Americans Campaign’s United for Citizenship conference, where more than 150 representatives from organizations across the country will discuss next steps in helping more immigrants become citizens. This national conference culminates in a free citizenship workshop Sept. 12 to help eligible immigrants through the naturalization process.

For more on the roundtable, see coverage on New America Media.