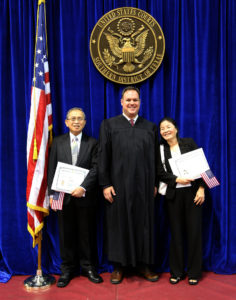 Thanh Do and his wife, Thu, at his citizenship ceremony, December 2013

In your late 60s, your life is typically already established. But that wasn’t the case for Thanh Do, who uprooted his life and moved to the United States from Vietnam in 2008 seeking freedom and opportunities.

“I was very grateful to finally be in the U.S.,” says Thanh. “My life here in America has been very comfortable with less worries.”

But Thanh’s journey here was not always easy. After living in the U.S. for five years as a lawful permanent resident, he became eligible for citizenship in 2012, at age 72. Although he wanted to become a U.S. citizen, his age and limited English skills proved to be a challenge.

“Because of my age, learning English was the hardest and it took time,” Thanh says.

Thanh enrolled in English and civic classes with BPSOS.

“Receiving support from BPSOS staff and volunteer teachers made the journey more bearable,” he says.

Although Thanh was nervous for his interview with United States Citizenship and Immigration Services, his hard work paid off. He passed his exam and became a citizen in December 2013.

“I was very grateful and happy to become a U.S. citizen,” says Thanh. “No one can take away my freedom.”

Thanh believes it’s important for lawful permanent residents (LPRs) to become citizens. “The United States stands for freedom and the right to vote,” says Thanh, who also thinks LPRs should become citizens for the future of their families and children.

Thanh encountered barriers to citizenship that so many others face too. But, as Thanh’s story shows, help is available to overcome these obstacles. The New Americans Campaign and its network of partners work across the country with people just like Thanh, helping them achieve their American dream.