Ethnic Media Roundtable Underscores that Citizenship is Easier than You Think 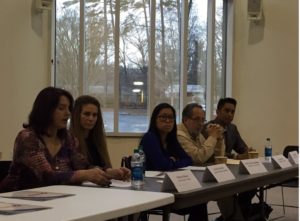 The event was attended by New Americans Campaign partners and clients, as well as mainstream and ethnic media, including nine journalists from local media outlets. Attendees talked about the role of ethnic media in amplifying the importance of citizenship and the stories of these newly naturalized citizens.

“I didn’t know about this kind of program and service. I didn’t know that you could actually apply with a fee waiver,” said Murillo. He lived in the U.S. for more than 20 years before applying for citizenship and naturalizing in 2015.

Murillo expected the application process to be more difficult.

For more on the roundtable see coverage from New America Media.