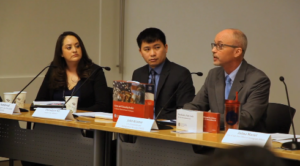 Vanessa Sandoval of SIREN, Theodore Ko of Asian Law Alliance and John Kramar of USCIS spoke at the ethnic media roundtable in San Jose on Feb. 5

Over 50 attendees, including journalists from 21 media outlets, attended the roundtable to discuss the role of ethnic media in amplifying the importance of citizenship and to hear personal stories from newly naturalized citizens.

“After someone takes the citizenship test, they often say, ‘That wasn’t as bad as I thought,’” Kramar said. “There was a time in years past when you would file and it would take several years. We’re now averaging four to five months.”

That means that green card holders who apply for U.S. citizenship now could be able to register to vote in time for the 2016 elections.

“When we become a U.S. citizen,” he said, “we have the key – the key to the higher education door, the key to freedom, the key to vote.”

With the upcoming Presidential elections, immigrant rights organizations are encouraging those who are eligible to apply for citizenship now.

For more on the roundtable see coverage on New America Media.