Giving the Gift of Citizenship 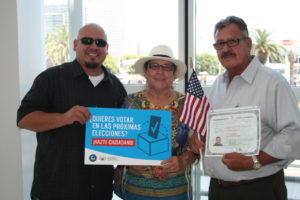 “If I leave you, I don’t want to leave you like this,” Letisia Montoya said to her husband, Saul.

Letisia, a U.S. citizen, was recently diagnosed with cancer. And while she worried about her illness, she also feared for her husband and his certainty in the country as a green card holder.

That’s because lawful permanent residents (LPRs) aren’t automatically protected from deportation. And Letisia was concerned about the possibility of changing laws and what the future might hold for her husband if that time ever came.

While he knew that he could make a better life here, Saul had difficulty finding employment his first year in the country, and he was always aware of his status as an immigrant.

“I would often think, ‘Is immigration going to stop me?’ ” said Saul. “ ‘If I run a red light, will I get stopped and deported?’ ”

He also witnessed immigration raids in Los Angeles and at the company where he finally found employment.

“I didn’t want the same thing to happen to me,” he said.

His fears persisted through the years, despite obtaining his green card and achieving lawful permanent resident status. The last time Saul and Letisia visited his birth home in Mexico, he was heavily questioned by border patrol.

“I felt humiliated in the situation,” Saul recalled. “I felt like they were targeting me just because I was a (lawful permanent) resident.”

That’s when Letisia urged him to take action.

“I told him to become a citizen in case I leave you,” said Letisia. “I don’t want to leave you like this to keep going through this. He was the only one in the family who wasn’t a citizen.”

“We knew our lives would improve and we would be more relaxed if I became a citizen,” Saul said.

He had also called the U.S. home for a long time and had grown fond of it.

“I’ve always followed the news and current events and have seen the hardships in Latin America because of corruption and violence,” said Saul. “I’ve lost the hope of one day returning to my country.”

Saul sought the help of New Americans Campaign partner NALEO Educational Fund, which helped him complete his application and also recently shared his story during citizenship month in September.

He became a citizen on July 22.

“To me citizenship means a dream accomplished,” he said. “It’s something I never thought was possible.  My heart is now Mexican and American.”

Saul’s citizenship brings hope to his wife and children, who are overjoyed that he naturalized.

“I see her battling stronger against her illness now,” Saul said.

“I cannot wait for November [2016]!” he said. “I want to complete my voter registration and go vote in this election.”

Saul also enjoys feeling more secure both at home and when he travels. One of the benefits of citizenship is easier travel. As a citizen, Saul can now travel with a U.S. passport, secure in knowing that U.S. embassies and consulates are available abroad in case of emergencies, and he won’t be limited in the amount of time he can spend outside of the country.

Mostly, Saul feels more secure and respected by others as a U.S. citizen. And he encourages other LPRs to pursue citizenship if they can.

“I was shocked by how easy the entire process was,” said Saul. “I always thought it was so difficult. I regret not having done it earlier.”

Both Saul and Letisia are grateful for the help NALEO Educational Fund provided and want others to know that help does exist for those interested in citizenship.

“I feel a lot better now that he’s a citizen,” Letisia said. “Since I’m ill, you never know what can happen tomorrow. I want him to enjoy all the benefits and opportunities [of citizenship].”