What does it mean it to be a naturalized citizen? An alien no more? What do you say when people ask, “Where are you from?”

That’s when I answer, “I’m American, but not American born.” 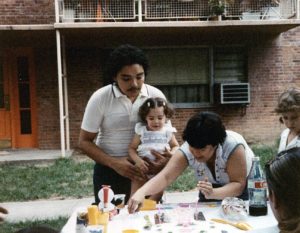 From left to right: My father, older sister, mom and neighbors

I was born in Venezuela to two Venezuelan parents… Caraqueña, meaning “from Caracas,” the capital of the country. My father brought us to the U.S. when he received a full scholarship to Georgia Tech, where we stayed in family dorms. He was studying computer science, something very few people understood at the time.

Growing up, I wasn’t exposed to the same children’s stories most American kids are. My sisters and I learned English more quickly than our parents, seemingly through osmosis. As a child, I would sing along with songs on the radio, not knowing what the words meant. To this day, I can recall every word to some 80’s songs, and as I sing, I discover their meaning as if for the first time. 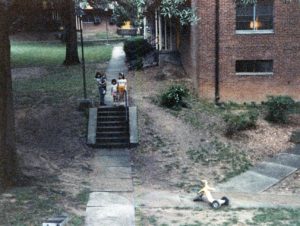 Being an immigrant isn’t easy. It sure is interesting, though. Many of us develop identity crises in high school, and as we get older, we realize it’s O.K. to be different. Our knowledge of other cultures can make us see the world through a more critical eye. We are third-culture kids, global citizens of the world. Third-culture kids are people who travel extensively between the ages of 2 and 18, during which their vision of the world is being formed. They combine their knowledge of other cultures into their own ‘third culture.’ My older and younger sisters were born in the U.S. They were American. My twin sister and I weren’t, because we were born in Venezuela, and our parents weren’t U.S. citizens. 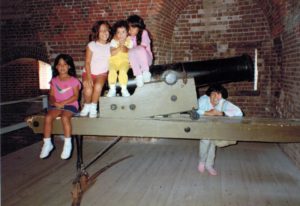 As a teenager, I made a master plan to learn five languages before I die. I realized I was lucky to speak both English and Spanish fluently. Knowing Spanish would allow me to learn French and Italian more easily. English would make it easier to learn German. I had a passion for music, and I was determined to learn the languages of Opera. I also didn’t want to go into debt. Both of my parents had studied in university for free, and I realized I could do the same if I studied abroad.

Traveling is a more effective way of learning languages, I thought.

Following my master plan, I began to learn German intensely. German is difficult, and it’s best to learn it at a young age. At age 19, I applied for U.S. citizenship. I was 20 when I went to Germany, where I learned German at a Goethe Institut in a little town called Prien am Chiemsee, near Munich. Trips back and forth to the U.S. were expensive and impractical. I wanted to be able to travel for more than six months without losing my green card!

Around the same time, a Colombian friend of mine qualified for a scholarship to study in Germany. I researched the program, and to my dismay, I didn’t qualify, because I wasn’t yet a U.S. citizen. My application was in review. My Colombian friend, Maria, had come to the U.S. with her family seeking asylum, and they were all citizens. They’d been in the country only for a few years.

Becoming a U.S. citizen isn’t difficult. However, many people hesitate to do it, perhaps due to the intimidation factor.

There’s value in letting them know how easy the process really is.

During the naturalization process, you’ll receive important letters notifying you of appointments (fingerprints, history test, English test). These notifications are very important. If you can’t make it to an appointment, it’s imperative that you reschedule. If you don’t reply, your case will be closed. You don’t want that to happen!

My fingerprints were taken, and now came the time to study for the history test. I downloaded and printed out a study guide I found on the Internet (a simple multiple choice test), which I learned by heart. When I took the test, I was surprised to see that every question on the history test had been taken directly from the study guide, almost word for word.

The English test was even easier. I was asked to write down this sentence: “I go to the store to buy some bread.”

I wrote the sentence down on a blank piece of paper, and ta-da! I passed! I couldn’t believe it.

Before you know it, I was in a room full of newly naturalized citizens. We sang the national anthem, and my voice bellowed amidst the crowd. We walked out happily with our citizenship certificates. I became the first naturalized citizen in my family. Shortly afterward, my father and twin sister followed suit. I went on to study in Caracas, France, and Germany.

Now I’m pursuing a patent for a multi-language keyboard I invented, another consequence of my life’s geographically diverse journey, and the role it’s played in shaping my experiences and my life.

Daniela Semeco, the inventor of the PolyKeyboard, is a multilinguist from Venezuela who acquired her language skills during time spent in France, Germany, the United States and Venezuela. Her company, Polyglotte Inc., is a benefit corporation facilitating the use of language through the PolyKeyboard. This story is Semeco’s personal journey to citizenship.

Back to the Top