More than 20 media representatives and 10 community organizers gathered on Jan. 17 in San Jose to discuss the role that media can play in the New Americans Campaign. 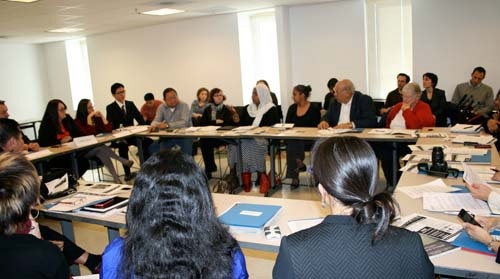 Radio host and reporter Hana Baba of the local public radio station KALW discusses the importance of human stories in getting out messages about citizenship.

The roundtable, hosted by New America Media, featured speakers from SIREN and other local community organizations, who provided information about the New Americans Campaign; two immigrants, one from Taiwan and one from Mexico, who told their personal stories about what citizenship means to them; and an open discussion among members of the media that serve local immigrant populations including Chinese, Filipino, Indian, Korean, Latino and Vietnamese communities.

The discussion focused on the challenges that keep some eligible Legal Permanent Residents from applying for citizenship (from language to financial and psychological barriers) — and the ways that media serving immigrant communities can address these challenges. Among the ideas discussed were the publication of an editorial that articulates the family and community impact of becoming a U.S. citizen. The media roundtable, the first of six to take place in the first half of 2014, aims to engage ethnic media as partners in the New Americans Campaign through participation in roundtable discussions; coverage of the media roundtables and the New Americans Campaign; and the publication of an in-language editorial that informs their audiences about the importance of applying for citizenship and the free resources available to them through the New Americans Campaign.