Immigrants and the Military Path to Citizenship 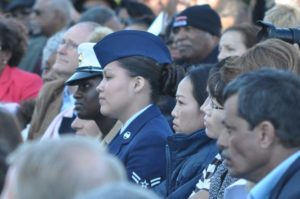 On April 30, Arizona State University hosted an event on immigrants in the military. There are thousands of immigrants who are not even U.S. citizens who have nonetheless joined the U.S. armed forces and are fighting for their adopted country.

Defending our country, however, is no guarantee against future immigration problems—even deportation­—if immigrant service men and women fail to take the steps to become citizens. Fortunately, the path to citizenship is easier for immigrants who have served or are serving in the armed forces.

Members of the armed forces serving during a period of hostilities are eligible for citizenship under a special section 329 of the Immigration and Nationality Act. (Since we are currently in a period of hostilities, begun in September of 2001, this is the provision that applies to recent veterans or active duty service members.) To qualify, a service member must serve honorably for any period of time in active-duty status or as a member of the Selected Reserve of the Ready Reserve.

Certain ordinary requirements for naturalization do not apply to these members of the military. For example, the five-year residence requirement does not apply. Instead, an immigrant member of the military need only have been physically present in the U.S. at the time of enlistment (whether or not the individual was admitted as a permanent resident) or the individual can be admitted as a permanent resident at any time after enlistment (or induction). The military applicant does not have to pay the application fee, nor is he or she required to be 18 years of age. Other requirements of citizenship apply—those relating to good moral character, knowledge of English and Civics, and attachment to the U.S. Constitution.