From LPR to First Time Voter: The Benefits of Citizenship During an Election Year

This last Tuesday, millions of Americans participated in one of our most important civic duties – voting. Among those millions, thousands of newly naturalized citizens cast their first ballot as Americans. For the 8.8 million permanent residents living in the United States, the act of voting serves as a benefit of citizenship but one that doesn’t become a reality until citizenship is achieved. Ruby selects her candidates as she votes for the first time.

Ruby left El Salvador at the age of 10. 30 years later, she was still living in the United States as a permanent resident. For Ruby, a green card just wasn’t enough. Citizenship meant being a part of the country and belonging somewhere. She became a citizen in the fall of 2014 so that she could vote in the November elections.

“It’s important to have a say and it feels good to be able to do that finally because I’ve never been able to have any kind of opinion,” she says.

These are sentiments shared by fellow new American, Teresa Pedrizco, who applied for citizenship in March of 2014. 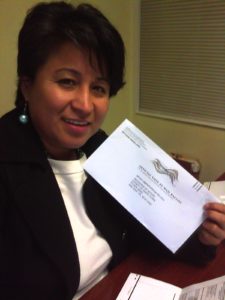 “The reason I wanted to become a citizen is to vote,” says Teresa. For people like Ruby and Teresa and the thousands of new Americans voting for the first time, the election process allows them to express their opinions freely and play an integral part in making our country a better place.

“There is a lot going on in the country policy-wise that I don’t approve of,” says Teresa. “And yes, I can march, I can keep being active, donating money to campaigns, but now I

can vote and make a difference that way.”

For Teresa, there’s a sense of pride in doing more than trying to influence people to support certain causes. Now, she can do it for herself by voting.

“The best way to make a difference and change policy is to make your voice heard,” she says. “You have to vote.”