Earlier this month, it got easier for people born in Mexico but living in the U.S. to get copies of their birth certificates, making it easier for Mexicans hoping to obtain U.S. work permits, driver’s licenses and protection from deportation.

Starting Jan. 15, the Mexican government began allowing its citizens to receive certified copies of their birth certificates from any Civil Registry Office in Mexico and from consulates around the world. In the United States, 50 Mexican consulates are now able to access a digital archive of birth certificates and print copies for $13. Those born in Mexico will no longer need to travel back to their homeland to obtain a birth certificate or struggle to find relatives to locate the document and risk its mailing.

This change in practice by the Mexican government not only may help immigrants benefit from President Obama’s executive action. It also makes the journey for those who are eligible to become U.S. citizens much more accessible.

Obtaining a birth certificate is a step toward solidifying a formal identity in the U.S. And it’s one item in a long list of documents immigrants must procure and paperwork they must complete in order to travel the path from immigrant to legal permanent resident to citizen. 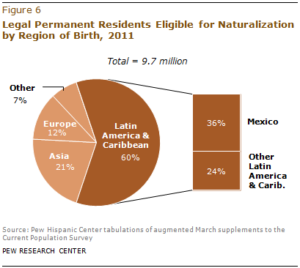 According to the Pew Research Center, in 2011 more than one-third of the 9.7 million immigrants eligible for naturalization were Mexican. While Mexican naturalization increased sharply in the late 1990s, the rates have declined significantly since. In 2011, Mexicans naturalized at a rate of 36 percent, lower than the rate for all immigrants. Mexicans also have the lowest rate of naturalization compared with immigrants from Latin America and the Caribbean.

Mexican immigrants newly expanded access to their birth certificates could change that. In addition to the benefits of visiting consulates in the U.S., extended consulate hours mean people have more opportunities to get to the office.