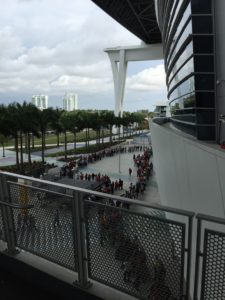 On a warm Saturday morning in March, thousands of green card holders arrived at Marlins Park in Miami, a line snaking around the palm streets outside of the ballpark. Inside, the Miami New Americans Campaign and hundreds of volunteers assembled tables and chairs, laptop computers and paperwork. They were prepping for one of the largest citizenship workshops hosted by the Campaign.

Over 1,300 lawful permanent residents (LPRs) registered in advance. On Saturday, March 19, they arrived to receive help completing their citizenship applications. The doors to the ballpark opened at 9:00 and by 1:30 pm, over 800 LPRs had come through. In total, 1,180 LPRs received assistance on Saturday.

Months of planning and coordination by local New Americans Campaign partners went into the making of the workshop. 650 volunteers helped at the event. From assisting with the completion of applications, providing legal review and helping applicants apply for fee waivers, they were an integral part of the process. 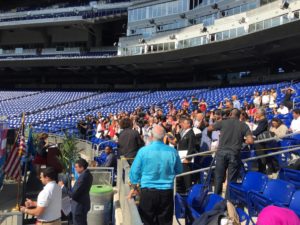 50 people from 16 countries were sworn-in as new U.S. citizens

The workshop was enhanced by a special oath ceremony administered by United States Citizenship and Immigration Services. 50 individuals from 16 different countries were sworn in as new U.S. citizens while other aspiring new Americans started the process.

These organizations will come together in early April to review the records from this workshop and coordinate follow-up services to any LPRs requiring additional assistance.