On June 3rd, the Office of Immigration Statistics of the Department of Homeland Security released its fiscal year 2013 statistics on naturalization. These statistics give us a look at how many persons are becoming citizens, what are the top countries of origin, and which states and cities have the most new Americans.

How many are naturalizing? In the government’s fiscal year 2013 (which ended September 30, 2013) 779,929 immigrants became citizens. This is a slight increase from the year before. In fact, since 2010—when naturalizations dipped to their most recent low point after the government caught up with a surge in applications caused by a hike in the application fee—naturalizations have been steadily increasing. Still, the number of immigrants being naturalized is not quite keeping pace with the number who are becoming permanent residents—a little more than one million per year in recent years. 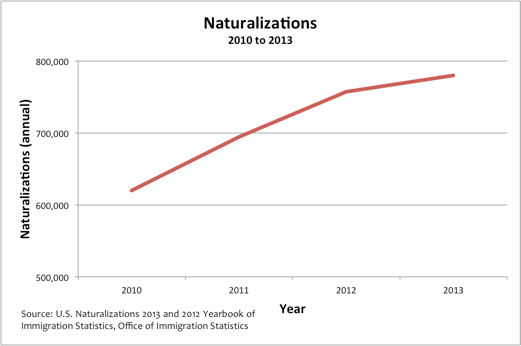 Who is naturalizing? Mexico is the top country of origin for our newly naturalized citizens. In 2013, India replaced the Philippines as the number two country of origin, but those three countries have been in the top three for the past three years.

Where are immigrants naturalizing? Not surprisingly, the top three immigrant gateway states of California, New York, and Florida are also the top three states for new Americans. In 2013, nearly 165,000 immigrants became citizens in California alone. The top five metropolitan areas in which immigrants are becoming citizens are New York, Los Angeles, Miami, Washington, and Chicago.

The paper from the Office of Immigration Statistics is available here.