In the late 1970s, Raquel Vergara came to the United States on a tourist visa with her two sons, Ricardo and Alvaro. She was embarking on a new journey after a divorce from her husband of 22 years. Political turmoil had also erupted in her home country, El Salvador. 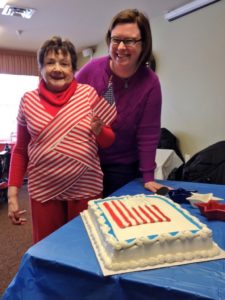 This new journey was an opportunity to experience life in America. It brought her to California, where she fell in love with the country and soon with a gentlemen from her new town.

When news of her ex-husband’s death reached Raquel in the States, she and her children traveled back to El Salvador for his funeral. They were kept there for six months. El Salvador had erupted in civil war.

In 1980, a U.S. work permit enabled Raquel and her sons to leave the violence in their home country. Back in the States, she applied for political asylum.

She also remarried, to the man she met during her first visit to the United States, and they moved to nearby Nevada. Raquel was excited about her new life full of second chances. But her new journey had unforeseen roadblocks.

As Raquel applied for her green card she discovered that her new husband had illegally married another woman. Devastated, Raquel sought out the help of lawyers to dissolve her marriage. She wanted nothing to stand in her way of becoming a permanent resident.

The cost of legal representation proved too costly for Raquel. She had to face immigration officials alone to explain her case.

She felt proud to have conquered this big step in her journey and to have done it on her own. Raquel was later able to get her divorce, and she moved back to California.

Life wasn’t always easy, though. In the mid-1990s she lost her eldest son, Ricardo, in a car accident at the age of 33. But Raquel always persevered. In the wake of her son’s tragedy and nearing the age of 60, she found the courage to apply for employment again.

“I was terrified to go back to work,” Raquel remembers. “When I got my job it gave me confidence in myself.”

Raquel moved to the Detroit suburbs with her son, Alvaro, after he accepted a job opportunity with Chrysler. She’s lived in Michigan ever since. Alvaro, a product of the immigrant American dream, received his mechanical engineering degree from the University of Phoenix. He’s now married with two children who attend the University of Michigan.

After Raquel retired and had more free time, she started to think about citizenship. In 2016 her green card would be up for renewal.

“I always said this time around, if I’m still alive by then, I deserve to be a citizen instead of renewing my green card,” said Raquel. “I’ve had my green card since 1988. This is my country. I’m not going anywhere.”

Raquel lives in a low-income community and isn’t in good enough health to travel to Detroit. Although she dreamed of citizenship, she was concerned about the application costs and how she would physically complete the process. That’s when she got online and searched for someone who could help. She connected with an agency in Chicago, which referred her to a local organization, Michigan Immigrant Rights Center (MIRC). They answered her call for help and sent a staff member to work with her at home. There they helped Raquel with her application and request for a fee waiver.

“I’m so grateful to the people who helped me,” says Raquel. “It’s hard to put money together when you don’t have enough.” 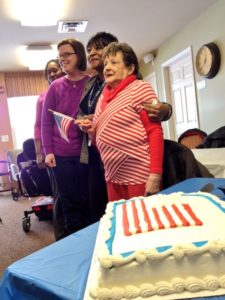 Raquel with USCIS Immigration Officers Stewart and Moore and, Susan Reed of MIRC

Raquel’s application for citizenship was accepted in March 2014. Nearly a year later, Raquel received the call she had been waiting for. She had an interview date.

On Friday, Feb. 20, United States Citizenship and Immigration Services came to her home for her interview. Raquel passed with a perfect score.

Staff members from MIRC were there to celebrate with her on this important day. She now awaits her swearing-in ceremony.

“I feel so good,” says Raquel. “And I feel so grateful to the United States because it has been a hard time. You have to leave everything behind. It’s tough. But at the same time it’s been so good. I feel like home.”