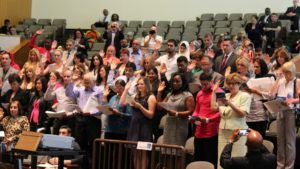 The National Academies of Sciences, Engineering and Medicine recently released a book-length report in which they look at immigrant integration in the U.S. The report, “The Integration of Immigrants into American Society,” contains interesting discussion and mixed news on naturalization.

The good news is that, in recent years, the level of citizenship acquisition rose. In 2002, 50 percent of eligible immigrants naturalized. By 2012, the proportion rose to 58 percent.

On the other hand, the report notes, the proportion of immigrants who have become citizens in the U.S. is lower than in some other immigrant-receiving countries. The level of citizenship among working-age immigrants who have lived in the U.S. 10 years or longer is 50 percent, compared with 61 percent on average among the 15 Organization for Economic Cooperation and Development (OECD) countries.

Adjusting the statistic to exclude undocumented immigrants put the U.S. slightly above average, but still far below some countries. In Canada, 89 percent of immigrants residing 10 years or longer had become citizens. In Sweden, the figure is 82 percent; in Australia, 81 percent; and in the Netherlands, 78 percent.

While it is encouraging that naturalization rates have been going up, the report highlights a troubling trend regarding who is naturalizing. The report notes that the overall trend hides a “deepening divide” in the path to citizenship. Poorer, less educated immigrants are less likely to be citizens compared to their proportion of the eligible population, while immigrants with more education and means have become citizens at a higher rate than their proportion of the eligible population would indicate.

There is some evidence, the report says, that in the U.S. the probability that immigrants with low levels of education acquire citizenship has been going down in recent years. The same trend is not evident in Canada, according to the report.

Outside these demographic factors, however, the level of naturalization is still modest, compared to the percentage who, when asked, say they would like to become citizens. The research panel believes that the reasons so many immigrants fail to naturalize still has not been satisfactorily explained:

“Overall, moderate levels of naturalization in the United States appear to stem not from immigrants’ lack of interest or even primarily from the bureaucratic process of applying for citizenship. Instead the obstacle to naturalization lies somewhere in the process by which individuals translate their motivation to naturalize into action, and research has so far failed to clearly identify this obstacle.”

Translating this motivation into action is, of course, part of what the New Americans Campaign is about.

Stay tuned for more analysis of the National Academy of Sciences report.