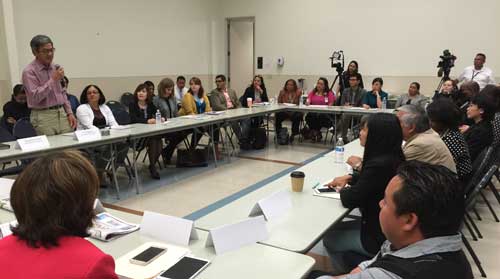 Applications for naturalization spiked in the last year, a common trend during presidential election years. Local Campaign partners are helping applicants navigate the process, which is much easier than people think.

The New Americans Campaign provides free and low-cost services, including citizenship workshops and English language and civics classes. The roundtable underscored the accessibility of these services and local Campaign partners from Bonding Against Adversity, Boat People SOS and New American Workforce spoke. Newly naturalized citizens also spoke about their experience with the citizenship process.

While exercising their right to vote is an important factor prompting some LPRs to apply for citizenship, the benefits of becoming a U.S. citizen extend past the November elections.

Another speaker at the roundtable was Texas State Representative Gene Wu, who indicated that 40 percent of the people in his district are foreign-born.

For more on the roundtable and the benefits of citizenship see coverage by New America Media.