As we wrap up 2015, the New Americans Campaign looks back on a busy and successful year helping lawful permanent residents (LPRs) apply for and achieve citizenship.

Here are our top 10 highlights:

1. Expanded Our Reach to LPR Communities

Since July 2011, the Campaign has helped LPRs complete more than 180,000 citizenship applications and has saved aspiring citizens and their families more than $161 million in legal and application fees.

In July the Campaign celebrated its fourth anniversary by launching a new site in Seattle. Seattle became the 17th city to join the Campaign. OneAmerica and Asian Counseling and Referral Services (ACRS) are leading this site. The Campaign also launched an 18th site in Washington, D.C., led locally by Asian Americans Advancing Justice (AAJC).

3. Submitted a Letter to United States Citizenship and Immigration Services

In March, the New Americans Campaign submitted a letter to United States Citizenship and Immigration Services (USCIS) outlining its experience-based ideas for the development and implementation of the citizenship media campaign announced as part of President Obama’s executive actions on immigration. The letter was signed by 15 Campaign partners. To follow up on this effort, Campaign leadership penned an op-ed for The Hill, which called on the Obama administration and Congress to increase their engagement in helping people become U.S. citizens. The op-ed cites the need for a unified, consistent effort on all levels of government to put better integration policies in place. 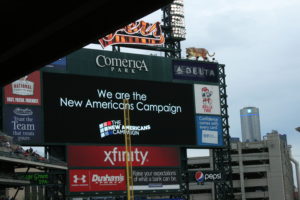 Across the country, our partners explored new and innovative partnerships with sports teams, including Major League Baseball and Major League Soccer teams. Detroit partners distributed information about the naturalization process and their citizenship services at the Detroit Tigers’ “¡Fiesta Tigres!” celebration in August. On Sept. 12, the San Jose Earthquakes hosted a citizenship ceremony at Avaya Stadium at which 10 individuals were welcomed as new Americans and recognized at halftime. In Miami, our national partner New American Workforce partnered with the Miami Dolphins to air public service announcements about that program and the New Americans Campaign throughout the Dolphins’ season.

5. Hosted the United for Citizenship Conference and Mega Workshop

The annual United for Citizenship Practitioners Conference brought together 180 New Americans Campaign partners from across the country in Dallas. The conference, held Sept. 9 to -12, provided local partners the opportunity to share best practices and network with other practitioners. United States Citizenship and Immigration Services Director León Rodríguez joined practitioners at the conference, attending a Naturalization Working Group meeting and providing a keynote address. Read more about his participation here. The conference culminated in a large workshop at the Santa Clara Community Center where local Campaign patterns provided free citizenship services to more than 300 aspiring new Americans. Campaign partners from around the country volunteered their time to register applicants and assist with the various components of the citizenship application. Read more about the conference and the mega workshop here.

6. Discussed the Historic Shift in Migration Patterns and Opportunities among Asian American and Pacific Islander Immigrants

Amid news of a historic shift in migration patterns from China and India, national and local leaders joined a telephonic press conference in May to talk about citizenship assistance and opportunities among Asian American and Pacific Islander (AAPI) immigrants. The call was hosted by the New Americans Campaign and New America Media. A full report is available online, as is a recording of the call.

Campaign partners Immigration Advocates Network and Pro Bono Net launched the next-generation platform of Citizenshipworks. The launch of the Citizenshipworks 2.0 platform marks a significant milestone in the application of innovative technology to increase access to justice for low- and moderate-income immigrants and reduce the economic, language and geographic barriers an overwhelming number of immigrants in the U.S. face. For the first time, LPRs anywhere in the country have free access to an online, accessible, in-language platform that allows them to apply for naturalization on their own or access a national network of nonprofit immigration legal services providers if they need assistance, either in person or virtually. In March, Citizenshipworks partnered with Voto Latino to promote and test the next-generation platform in New York City and New York State.

More than 2.6 million Mexican-native LPRs are eligible to become U.S. citizens. Thanks to New Americans Campaign national partner NALEO Educational Fund and its relationship with the Mexican Embassy, the Campaign took a first step in October to help more of these LPRs access citizenship services offered by Campaign partners. A webinar for consulate staff and naturalization service providers on Oct. 14 featured a speaker from the Mexican Embassy, staff from the Mexican consular network and New Americans Campaign partners. More than 120 attendees heard specific information about the services that consulates and Campaign partners provide and examples of how Mexican consulates and Campaign partners are working together to offer naturalization help. Learn more about this new partnership here.

9. Helped Generate 10,000 Naturalization Services Inquiries in One Day through the ‘¡Protégete! … ¡Ciudadanía Ya!’ Campaign

The campaign emphasized calling the NALEO hotline to direct applicants to services. Though the campaign was LA-focused, it included a lot of media coverage including national press by the Azteca and Univision media networks. Because of this, the NALEO hotline received thousands of calls: over 13,500 calls in the month of November. They continue to refer applicants to nearby service providers and events and hope to continue to work and promotion into 2016.

These unique partnerships are a result of New Americans Campaign collaboration and is helping to improve the quality of naturalization and immigration services across the L.A. and New York Campaign sites.

USCIS has proposed to change Form I-912, the fee waiver form for naturalization. The proposed changes will make it harder for low-income LPRs to complete the form and harder to prove low-income status for families who are below 150 percent of the federal poverty level. A notice of revisions made to Form I-912 and the Instructions for Application for Fee Waivers and Exemption were published in the Federal Register. Two rounds of comments were submitted to USCIS, in May and July. Campaign partners submitted comments as individual organizations and also through the Naturalization Working Group. These comments argued that making it harder for low-income LPRs to apply for citizenship contravened the stated goals of the Task Force on New Americans, which was created as part of President Obama’s executive actions on immigration. The comments also highlighted legal and policy inconsistencies and articulated specific ways to improve the fee waiver form.

2015 was a busy and successful year for the New Americans Campaign. The LPRs who Campaign partners assist are at the heart of our work from coast to coast. Their stories of triumph and achievement epitomize the idea of the American dream. We regularly share their inspirational stories and encourage you to revisit their successes here. Additional stories are available on our blog.