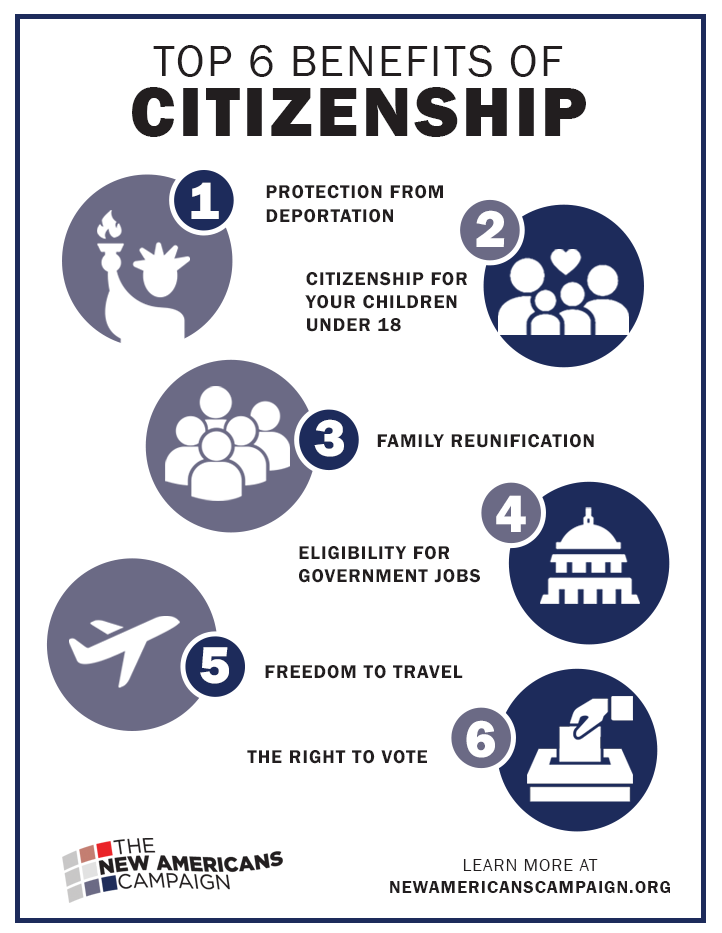 Many opportunities are available only to U.S. citizens. This Citizenship Day we are breaking down some of these benefits and encouraging citizenship-eligible lawful permanent residents (LPRs) to take the next step toward becoming U.S. citizens.

Becoming a U.S. citizen protects you and your children from deportation. As a lawful permanent resident, certain criminal convictions could make you deportable, and some actions put LPRs at risk for permanent consequences such as deportation.

2. Citizenship for your children

Children under the age of 18 who are lawful permanent residents automatically become U.S. citizens when their parents naturalize. Since individuals cannot apply to naturalize until they turn 18, this is truly a gift from parents to your children.

U.S. citizens can file immigration petitions with the government to reunite with family members. Although LPRs can file petitions only for their spouses, minor children and unmarried adult sons and daughters, U.S. citizens can petition for additional family members such as parents, siblings and married adult sons and daughters.

Some jobs are available only to U.S. citizens, such as those in the federal government. Additionally, naturalized citizens on average do better economically than noncitizens. As a group they earn between 50 and 70 percent more than noncitizens, have higher employment rates and are less likely to live below the poverty line. New citizens could also see individual earnings increases of 8 to 11 percent, directly tied to more job preparation, better employment matches and a greater ability to switch jobs.

LPRs’ travel time during a given year is restricted. U.S. citizens have the freedom to travel without these restrictions. They also have the opportunity to seek the help and protection of U.S. embassies and consulates abroad in the event of a personal crisis or civil unrest.

The right to vote is also a benefit of U.S. citizenship. Only citizens have the opportunity to elect the leaders they believe will best represent themselves, their families and their communities.

U.S. citizenship comes with many other benefits. LPRs live, work and pay taxes here but do not have the same access to public benefits. Some public benefits and programs, such as Medicare, may require LPRs to pay expensive premiums. Citizenship ensures equal access to critically important benefits for older people and people with disabilities.

Many immigrants feel a strong connection to their country of origin. But U.S. citizenship does not mean losing your heritage. In fact, many countries even allow dual citizenship so that you can maintain your status both in your home country and in the U.S.

On Citizenship Day and all year long, New Americans Campaign partners across the country are helping LPRs achieve their dreams of citizenship and obtain a more secure, successful status in the United States.