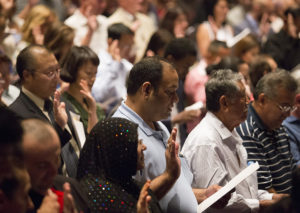 The federal government’s laissez-faire approach to immigrant integration might partially explain the gap between naturalization rates in the U.S. and, for example, in Canada. Recent federal government efforts to promote naturalization have been modest. For example, the report notes that, in 2007, the budget for the federal Office of Citizenship was $3 million. By comparison, the state of Illinois alone was spending a comparable amount to promote citizenship for its resident immigrants.

From 2009 to 2014, the citizenship grants awarded by the Office of Citizenship to organizations helping immigrants prepare for citizenship amounted to $43.2 million. By comparison, a private foundation, the Emma Lazarus Fund of the Open Society Institute spent $50 million in the late 1990s to help immigrants prepare for naturalization. These amounts are dwarfed by the amount that the government of Canada, with its smaller immigrant population, spends on immigrant integration programs (estimated to be more than 1 billion Canadian dollars, or about 970 million U.S. dollars, in the fiscal year 2010-2011).

On the other hand, while the U.S. lags in spending to promote immigrant integration, the fee charged to immigrants seeking to naturalize is among the highest among immigrant-receiving nations. In 2010, the median fee for naturalization in 34 countries across Europe, Canada and Australia was $220. The U.S. fee, $595, was the sixth most expensive.

In the absence of government encouragement, the role of family members, friends, community and nonprofit organizations, unions, and employers is important in encouraging immigrants to become citizens. The NAS report notes that, for every 1 percent increase in the share of co-ethnic immigrants who are naturalized in a metropolitan area, there is a 2.5 percent increase in the odds of an individual in that group to naturalize, according to statistical analyses. In other words, the more people from an ethnic group who naturalize, the more likely their peers of the same ethnicity are to follow their lead.

The report cites the work of one program, New American Workforce, which is run by New Americans Campaign partner the National Immigration Forum. That program, the report notes, “continues a tradition from a century earlier, when major employers such as Bethlehem Steel and Ford Motor Company provided English language classes to their immigrant workforce ….”

The report also mentions partnerships between nonprofit organizations and the government. One such partnership highlighted in the report, between Catholic Legal Immigration Network Inc. (CLINIC), another Campaign partner, and the federal Office of Refugee Resettlement, helped refugees prepare for naturalization.

While these private and public-private partnerships are important in helping immigrants prepare for citizenship, it may take a serious federal government commitment to scale up the naturalization rate in this country and bring it on par with countries such as Canada that have already made that commitment.