This week, more than 180 New Americans Campaign partners are gathered in Dallas for the annual United for Citizenship Practitioners Conference.

The conference began on Wednesday as attendees arrived to volunteer at a phone bank with the local Univision affiliate. Volunteers answered phone calls from 4:30 to 10 p.m. and addressed questions from lawful permanent residents (LPRs) about the naturalization process and an upcoming workshop on Saturday where LPRs will receive free help in completing their citizenship applications.

Attendees were also greeted by United States Citizenship and Immigration Services (USCIS) Director León Rodríguez, who dined with the volunteers and learned more about the Univision phone bank. 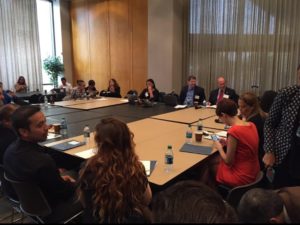 On Thursday, Rodríguez participated in the conference during a meeting with the Naturalization Working Group, the policy arm of the New Americans Campaign, and later as the keynote speaker during the welcome session.

“Citizenship above all is about holding people like me accountable,” said Rodríguez, who has served in this role since July 2014 and has made himself available to New Americans Campaign partners and other immigration practitioners since that time. His visit to the conference is one example.

During his speech, Rodríguez addressed the benefits and motivations for LPRs to become U.S. citizens.

“Part of it is the right to vote,” he said. “A lot of it is the ability to travel more easily, to bring relatives from other countries and [to] access more jobs, particularly ones in the federal government that you can’t get if you’re not a United States citizen.” 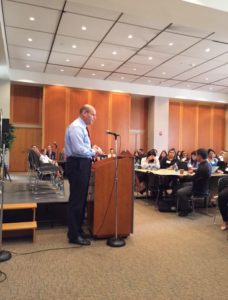 Rodríguez’s keynote speech at the United for Citizenship conference

Rodríguez also provided attendees with an update from Washington about USCIS initiatives across the country, including the Citizenship Public Awareness Initiative potential online reminders about citizenship eligibility and electronic filing, as well as credit card processing of the naturalization fee, which will begin next week.

Rodríguez encouraged New Americans Campaign partners to continue to make the case for citizenship and share the concrete and spiritual reasons why people should make the choice to become U.S. citizens.

“You should love the country and culture that you came from,” Rodríguez said. “There is a way to maintain your allegiance to your culture, your language, the land that you came from and still make the choice to say, ‘This is my home, not just for myself but for my children, for my spouse, for my community and my extended family.'”

Watch these highlights from his keynote address to campaign partners:

A full recap of the United for Citizenship Practitioners Conference will be available next week.