This Citizenship Day, Sept. 17, United States Citizenship and Immigration Services (USCIS) announced its award of nearly $10 million to 40 organizations to help lawful permanent residents (LPRs) prepare for and apply for U.S. citizenship. The grantees are located in 26 states across the country.

This is the seventh year of the agency’s Integration Grant Program. Since 2009, $53 million in 262 grants have been awarded in 35 states and the District of Columbia. USCIS estimates that more than 122,000 LPRs pursuing citizenship have been assisted by the agency’s integration grants.

The Integration Grant Program has benefited New Americans Campaign partner organizations in the past, and several campaign partners are on the list this year. 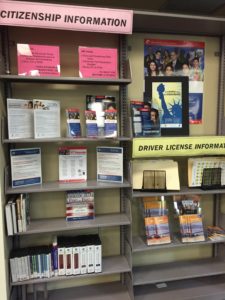 The L.A. Public Library supports citizenship by providing materials like these at its locations and by partnering with campaign partners to provide citizenship preparation classes, made possible in part by the USCIS Integration Grant Program

Asian Americans Advancing Justice – Los Angeles will expand its current citizenship services to help low-income Asian and Pacific Islanders. It will offer citizenship preparation classes in partnership with the Los Angeles Public Library in several of its branch locations.

The Central American Resource Center, also in Los Angeles, primarily serves clients from Guatemala, El Salvador and Mexico. This is the organization’s second grant from USCIS (the first was in 2009) and it will also be partnering with the Los Angeles Public Library.

The Instituto del Progreso Latino in Chicago plans to enroll 540 permanent residents in citizenship education classes and provide 520 LPRs with naturalization application services with this new grant. It is a member of the Illinois Coalition for Immigrant and Refugee Rights, a local New Americans Campaign partner.

The International Institute of the Bay Area in San Francisco will also receive its second grant from USCIS. With the new grant the organization will, among other things, be adding a Spanish-language class on U.S. history and government for seniors who are exempt from the English language requirement for citizenship.

The International Rescue Committee in San Diego will serve permanent residents who are primarily from Iraq, Mexico, Vietnam and Somalia with its second grant from USCIS.

Jewish Family Service of San Diego will expand its citizenship preparation services and application assistance to its varied clientele from Southeast Asia, South and Central America, Africa and Russia.

Make the Road New York, from the New York City metro area, will use its second grant from USCIS to continue its Pathways to Citizenship Initiative.

The School Board of Miami-Dade County (Miami-Dade) is Florida’s largest provider of English literacy and citizenship education and receive grant funding. Miami-Dade will continue its partnership with New Americans Campaign partner Catholic Legal Services of Miami to manage its Fast Track to Citizenship program. The program serves permanent residents from Cuba, Haiti, the Dominican Republic, and Colombia, among other countries.

For a full list of this year’s grantees, with a brief description of their plans, see this document from USCIS.

Congratulations to our partners and all recipients of this year’s grant program!