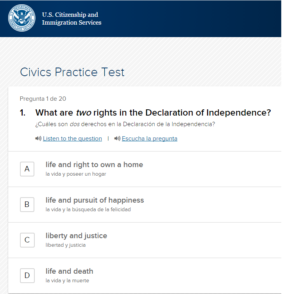 This resource was developed as part of the Task Force on New Americans, an element of President Obama’s executive actions on immigration announced a year ago. The Task Force was designed as a way for the federal government to better develop and implement a strategy to integrate immigrants into our communities.

The Spanish-language practice test also helps those applicants who are eligible to take the civics test in the language of their choice because of their age and how long they have been permanent residents, a disability or other exceptions and accommodations.

The practice civics test contains 20 multiple choice questions. That differs from the actual civics test, in which a USCIS officer asks applicants 10 questions from a list of 100 potential questions. Applicants must answer 6 of the 10 questions correctly in order to pass.

USCIS has implemented practice tests with the hope that they make the steps to citizenship easier for some immigrants. According to the Department of Homeland Security’s Office of Immigration Statistics, the median time a lawful permanent resident spends waiting to become a U.S. citizen is seven years. USCIS hopes that these practice exams will help applicants expedite the civics exam portion of the citizenship application.