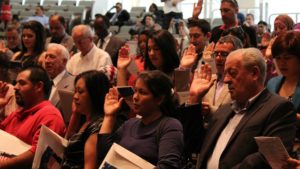 Earlier this week, United States Citizenship and Immigration Services (USCIS) released a series of promotional materials as part of the Citizenship Public Education and Awareness Initiative. This media campaign initiative was launched under the Task Force on New Americans and part of President Obama’s executive actions on immigration.

The media campaign is intended to raise awareness about the rights, responsibilities and importance of U.S. citizenship in an effort to demystify the naturalization process and provide lawful permanent residents with information to protect themselves against the unauthorized practice of immigration law. It will provide information on the naturalization process and educational resources, which can be found through the USCIS Citizenship Resource Center.

Online digital advertisements will run from July 1 to August 15 and a second phase of print and digital media ads will begin in September.

USCIS encourages immigrant-serving organizations to support the initiative by:

Video public service announcements are available here and digital, print, radio and video messages can be downloaded for free.

Earlier in the year, the New Americans Campaign submitted a letter to USCIS outlining its experience-based ideas for the development and implementation of the media campaign. The Hill also published an op-ed by New Americans Campaign Leadership calling on the Obama administration and Congress to increase their engagement in helping people become U.S. citizens. The campaign and its network of partners are excited to support USCIS in this initiative.