Why New Americans Are Good For the New Economy

Originally published on January 25, 2013 on UC Berkeley’s Building Resilient Regions’ website, a program of the Institute of Governmental Studies. 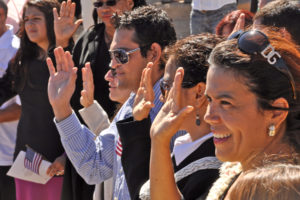 cashier. She was a legal permanent resident of the U.S. and eligible to become a citizen, but she had practical reasons to postpone applying.

“When you have bills to pay, spending hundreds of dollars to become a citizen seems like a luxury for another dream,” Belma said in a testimonial for the New Americans Campaign. “And I already felt like an American, so I thought, why go through the hassle?”

There are more than 8.5 million immigrants permanently living and working in the U.S. on green cards who quality for citizenship. Yet, according to the Center for the Study of Immigrant Integration (CSII) at the University of Southern California, only 8 percent of them become citizens each year. That’s because the process can be long, complicated, expensive, and intimidating.

But thanks to a new program that provided support in the form of citizenship classes and workshops, Belma was able to pass her citizenship exam in 2011. The New Americans Campaign aims to make it easier for legal permanent residents like Belma to become citizens by modernizing and streamlining access to citizenship-support services. The program is made up of a network of more than 80 legal-service providers, businesses, faith-based organizations, community leaders, and foundations who’ve put up upwards of $20 million into the effort.

The partners are working to reach out to potential citizens through programs like one in Los Angeles where neighborhood libraries are hosting citizenship classes, training librarians on the citizenship process, and putting up “citizenship corners.” The New Americans Campaign is also using new technology tools like the CitzenshipWorks website, which provides application guidance in English, Spanish, Chinese, and Vietnamese, and is reaching out to rural and other hard to reach communities. Some partners are also developing microloan programs to help with naturalization fees.

“When new Americans gain the rights, freedoms and responsibilities of citizenship,” organizers write on the New Americans Campaign website, “they contribute more fully to the vitality of our communities and our democracy as a whole.”

Citizenship provides the ability to vote and to bring family members into the U.S., but new research from CSII finds that citizenship by itself may also be an important economic development strategy, one that policymakers should not overlook as we emerge from the recession.

In Citizen Gain: The Economic Benefits of Naturalization for Immigrants and the Economy, BRR Network member Manuel Pastor and colleague Justin Scoggins ask what would happen if those 8.5 million legal permanent residents who are eligible to naturalize actually chose to do so?

They analyze census data and data on legal permanent residents who are eligible to naturalize from the U.S. Office of Immigration Statistics. They find that citizenship can actually boost individual earnings by 8–11 percent, and that earnings will rise over time, especially in the years immediately following naturalization, leading to cumulative earnings over 10 years that the researchers say will have ripple effects on the national economy. Specifically, they find:

How were researchers able to determine that the higher earnings were due to naturalization and not to other differences between the two groups like more education, spending a longer time in the U.S., or better English?

The authors isolated a “citizenship effect” by estimating the earnings premium associated with citizenship itself and controlling for things like human capital and personal and household controls; recency of migration, country of origin, and the state of the local labor market; and, finally, industry and occupation.

They found an independent effect of citizenship itself that they attribute to “more U.S.-specific investments in job preparation, better matching between employers and employees, and an enhanced ability to shift between jobs.”

They also speculate that there may be even more long-term gains “if the naturalization of one household member confers benefits on another through access to a wider range of social contacts, more U.S.-specific human capital investments, and improved employment.”

Legal permanent residents like Belma face significant hurdles to becoming citizens, including English language proficiency, knowledge of U.S. history and government, criminal background checks, and especially high application fees—approximately 52 percent of legal permanent residents eligible to naturalize are low-income, according to the report. But even from a purely economic standpoint, if Pastor and Scoggins are right, programs like the new Americans campaign may make a lot of sense, both for immigrants and for the country as a whole.