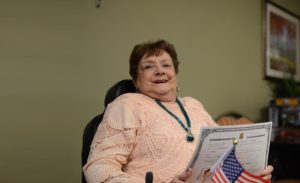 Today marks International Women’s Day. More than 20 million female immigrants live in the United States today. They represent 51 percent of the overall foreign-born population. As of 2013, the most recent year for which data are available, immigrant women accounted for 21.2 million of the total 41.3 million immigrants living in the U.S.

As of 2013, 49 percent of all immigrant women were naturalized, compared with the 44 percent of immigrant men. Between 2003 and 2013, women accounted for a larger portion of naturalized citizens and lawful permanent residents.

What do these women do? Where did they come from? And why did they come to the U.S.? While family reunification is a driving force, women are increasingly coming to the U.S. not as dependent relatives but as workers. According to the 2013 American Community Survey, there were 13.1 million immigrant women workers in the U.S. They comprised 7 percent of all U.S. workers, spanning nearly all occupations and industries.

More than half (50.3 percent) of these workers come from Latin America. A little under a third (31 percent) come from Asian countries. These women hail from across the globe, but the top five countries of origin are Mexico, the Philippines, India, China and Vietnam. Nearly 60 percent of all immigrant women workers live in five states: California, New York, Texas, Florida and New Jersey. The top five occupations of these women are maids and house cleaners, nursing, psychiatric, and home health aides, cashiers, registered nurses, and janitors and building cleaners.

According to public opinion research conducted by New America Media in 2009 only 13 percent of immigrant women work as professionals in the United States, even though 32 percent of them worked as such in their home country. The study concludes that women may be putting the wellbeing of family ahead of personal pride.

According to the same research conducted by New America Media, immigrant women are overwhelmingly the drivers of naturalization in their families. 58 percent of respondents stated that they felt the strongest in their family about becoming a U.S. citizen. Overall, 84 percent of the women surveyed want to become citizens, with 90 percent of female immigrants from Latin American and Arab nations indicating their desire to naturalize.

What’s Next for Immigrant Women?

As a recent La Opinión editorial points out, “there is still a long way to go to achieve equal opportunities, treatment and compensation for immigrant women.” It is important to recognize the barriers they regularly face, including undocumented legal status, access to health care, risk of abuse at home and at work and trafficking. Immigrant women are valuable contributors to the growth of the U.S.

Today, U.S. Citizenship and Immigration Services will administer an all-woman naturalization ceremony in Atlanta where 20 new Americans will pledge the Oath of Allegiance. This ceremony, which also marks International Women’s Day, will highlight initiatives to improve the quality of life of women.

More information about women and migration can be found through the Migration Policy Institute.